It can easily be argued that 1868 and 1945 were the two most significant years in Japanese history. The events of 1945 are widely known, but let’s consider what happened 150 years ago in 1868.
The Significance of the Meiji Restoration
The beginning of Japan goes back to February 11, 660 B.C.E., when Jimmu, a descendant of the sun goddess Amaterasu (according to Shinto mythology), became the first emperor. Even now February 11 is observed as National Foundation Day, a national holiday.
As an island country, Japan long existed with minimal “foreign” influence, developing as a unique country and accepting only what it wanted from near-by Korea and China—and much later from distant European countries.
In the 16th century, merchants and missionaries from Europe arrived in Japan, but in the 1630s most Westerners and their influence (including Christianity) were expelled and kept out of Japan until the 1850s.
In 1853 American Commodore Matthew Perry and his “black ships” arrived, and soon Japan was forced to open to the West.
Only fifteen years later, the country that had been virtually closed for nearly 220 years made major changes, “modernizing” in order to compete with Western countries as an equal.
The pivotal year was 1868 when drastic domestic changes resulted from what is called the Meiji Restoration.
In February 1867, 14-year-old Prince Mutsuhito succeeded his father, becoming the 122nd emperor of Japan. Since 1192 Japan had been under the political control of a shogun (military dictator), but in November 1867 the shogun resigned and in January 1868 the new emperor ceremoniously proclaimed the “restoration” of Imperial rule.
Then in April 1868, Emperor Meiji promulgated the “Charter Oath,” which dissolved Japan’s traditional feudal structure and established the legal stage for Japan’s modernization.
Kyoto (meaning “capital") had been the home of the Japanese emperor since 794, but the shogun had resided in Edo Castle since 1603. In September 1868, the Emperor announced that the name of the city Edo was being changed to Tokyo, or “eastern capital.” Emperor Meiji moved there the next year. 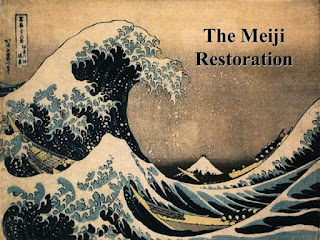 The Rise and Fall of Japan
The modernization/industrialization of Meiji Japan was rapid and thoroughgoing, at least in its outward manifestations. The sweeping changes to become more like the Western (imperial) countries led to increasing expansion of Japanese territory.
Hokkaido, the large northern island of present-day Japan, was consolidated in 1869. Ten years later the Ryukyu Islands (including Okinawa) were annexed. Then at the conclusion of the First Sino-Japanese War in 1895, Taiwan was ceded to Japan.
The Russo-Japanese War of 1904-05 was the first modern war in which an Asian country defeated a European power—and that war ended with Japan gaining control over Korea, which it fully annexed in 1910. Control over various southeast Asian countries followed.
What in Japan is called the Fifteen-Year War began in 1931, but the Meiji Restoration which had achieved so much for 75 years, came to a tragic end in August 1945. The changes of that fateful year were more dramatic and of more significance than those of 1868.
What about Japan Now?
After Japan’s remarkable recovery from the devastation of World War II and “miraculous” economic growth into a leading country of the world, Japan faces an uncertain future on this 150th anniversary year of the Meiji Restoration.
Economic conditions have been stagnant for many years now; the population is aging—and declining in number; and now there is understandable anxiety in the land because of the proximity to an unpredictable and potentially destructive North Korea.