February 13 was a special day when I was growing up, for it was my mother’s birthday. I wrote about that last year at this time, for it was the 100th anniversary of her birth. She was born on Friday the 13th and this year the 13th (today) fell on Friday again.
Little did I know as a boy that February 13 was also the beginning of one of the great tragedies in modern history. It wasn’t a Friday, but February 13, 1945, was an incredibly “unlucky” day for the people of Dresden, Germany. The firebombing of Dresden began on that day 70 years ago.
That catastrophe has been called “the worst war crime of WWII,” even worse than the atomic devastation of Hiroshima or Nagasaki. While that is a very questionable claim, there is no doubt that the bombing of Dresden was a terribly tragic event.
In the 1950s I learned at least something of the horrors of the bombings in Japan, long before I went to Japan to live and work—and to visit the sites of those bombings. But it was not until the early 1970s when I first became aware of the horrible devastation of Dresden. 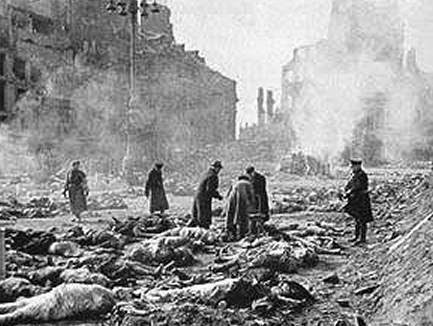 My introduction to the bombing of Dresden came via the book “Slaughterhouse-Five” (1969) by Kurt Vonnegut, who was actually a prisoner of war in Dresden at the time. He survived the firebombing by being held in Schlachthof Fünf (Slaughterhouse 5).
Vonnegut’s book is a satirical novel about the experiences of a soldier named Billy Pilgrim, who experienced, and survived, the firebombing of Dresden. But it is clearly semi-autobiographical, for Vonnegut was there as a 22-year-old U.S. army private who had been a POW since December 1944.
I was much impressed by Vonnegut’s book, in spite of (or because of?) all its eccentricities. Later when composing a list of my “top ten” novels, “Slaughterhouse-Five” made that list.
Last fall after reading it again, I made this notation: “Very much enjoyed reading this book again; it was as engaging as I had remembered from the first time & still on my top ten.” That is largely because in its own surreal way, Vonnegut’s masterful book carries a powerful anti-war message.
But Vonnegut’s work is a work of fiction and perhaps includes, and has led to, some exaggerations, both as regards the total number of causalities and the sinister motives behind the bombing.
Recent books, such as “Dresden: Tuesday, February 13, 1945” (2004) by British historian Frederick Taylor, give more historically accurate information.
In the concluding paragraph of the preface of his tome of more than 500 pages, Taylor writes,

Perhaps if there is a moral conclusion it can only be found in the German phrase that I heard again and again from the lips of Dresdeners, spoken with a passion born of terrible experience: Nie wieder Krieg. Never again war. With the terrible weapons of mass destruction at its disposal, humanity can no longer afford intolerance and war, and that is the ultimate lesson of the bombing of Dresden.

I think Vonnegut, who died in 2007, would have agreed with Taylor’s powerful statement.
But now with the ruthlessness and barbarity of the self-proclaimed Islamic State (also referred to as ISIS or ISIL), which is neither truly Islamic nor a real state, there seems to be growing clamor for the U.S. to use greater military force to crush that evil terrorist organization.
But is that wise? And might that possibly lead to another Dresden, or even to another Hiroshima?
Nie wieder Krieg! That is my deep hope and fervent prayer.
Posted by LKSeat at 5:29 AM