This year’s recipient of the Pacem in Terris Peace and Freedom Award will be Sister Simone Campbell, a Catholic nun and social justice activist best known as the leader of “Nuns on the Bus.”
Sister Simone (b. 1945) is the executive director of NETWORK, a nonprofit Catholic social justice lobby based in Washington, D.C. Tomorrow (Sept. 21) she will receive the prestigious award on the campus of St. Ambrose University in Davenport, Iowa.


NETWORK, social justice lobby that she heads, was founded in 1972. In 2004, Sister Simone became its Executive Director. She was an excellent choice, for she is a remarkable woman with great credentials.
She joined the order called Sisters of Social Service in 1964, taking her final vows in 1973. Four years later she earned a law degree from the University of California, Davis.


In the 1980s as she led the Community Law Center in Oakland, Calif., which she founded in 1978, she also began practicing Zen.
It is a bit hard to get one’s head around the idea of a Catholic nun who practices both law and Zen!


Sister Simone and her organization were relentless supporters of healthcare reform in 2009-10 despite the bishops’ warning that the bill would provide government funding for abortion.
She writes of how thrilled she was to be in the gallery when the House voted to adopt the Affordable Care Act (ACA), colloquially called Obamacare.


“That last one,” she writes in her book A Nun on the Bus (2014), “is a label I think the president will wear proudly, though his opponents used it as an epithet” (p. 93).
In April 2012, though, NETWORK was indirectly censured by the Vatican.


The reprimand was of the Leadership Conference of Women Religious (LCWR), the umbrella organization under which NETWORK operates. But NETWORK seemed to be the LCWR-affiliate that caused the most concern for the Vatican.
By that time they were widely known for their Nuns on the Bus tour that occurred in June and the beginning of July in 2010. Their purpose was to appeal for economic justice and to oppose the “Romney-Ryan budget” that gutted funding for safety-net programs. 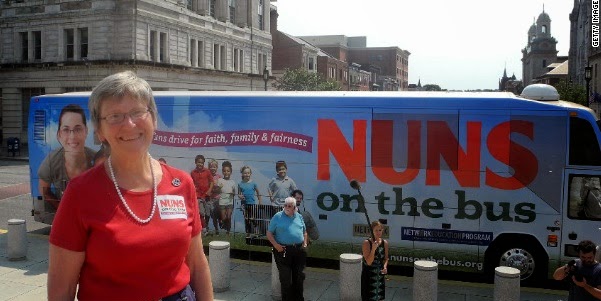 Because of Sister Simone’s support of Obamacare and her leading the 2012 bus tour, she was given six minutes to speak at the Democratic National Convention in Sept. 2012. You can see her deliver that speech here.

If there’s a single phrase to describe Sister Simone, it is “compassionate conviction.” With bravery, with courage, with optimism, she is focused on the common good. She is a champion for the cause of peace and justice. She has the will and the drive to do right.

Rep. Pelosi’s essay is part of a series in which dozens of women reveal what women they most admire. You can find the complete article here.


Last month June and I heard Sister Simone speak in Kansas City, and we were highly impressed with her. She has a most winsome stage presence and exhibits a good balance of self-confidence and humility.
We are also impressed that last year she led a second bus tour, appealing for immigration reform, and this month she and other Sisters started on a third bus tour, this time standing up against the Koch brothers and “big money” political donations. (Read about that here.)


In spite of all her political activities, Sister Simone remains a faithful Christian. Repeatedly, she writes, “Come, Holy Spirit,” and she refers to those words as her mantra (p. 91).
It is a joy to join with many others in honoring Sister Simone for what she has done and continues to do.