Most of us didn’t know much about U.S. Senator Ted Cruz (R-Tex.) until fairly recently. He became widely known, of course, after his 21-hour pseudo-filibuster on the Senate floor on Sept. 24. And since October 1 he, and those who agree with him, have been largely in control of the partial shutdown of the federal government.


Some basic facts about Cruz, who has been a member of the Senate only since January of this year: He was named Rafael Edward Cruz at the time of his birth in December 1970 in Calgary, Canada. Even though his father, Rafael Cruz, was born in Cuba, his mother, Eleanor Darragh, was born in Delaware. Because of his mother’s citizenship, Sen. Cruz is also an U.S. citizen.
After graduating as the 1988 valedictorian of Second Baptist High School in Houston, Cruz graduated from Princeton University and then was a magna cum laude graduate at Harvard Law School in 1995. He is clearly nobody’s dummy. But even brilliant people can be misguided in their political and religious views.
Recently I have received two emails mentioning Cruz’s father. A “Thinking Friend” in Louisiana wrote that Ted Cruz’s family became Baptists when they escaped from Cuba. Dan also said, “I saw a video of Cruz's father, speaking in broken English, comparing Fidel Castro and Barack Obama.” (Here is a link to that video.)
Then a good friend at church sent the link to this article by Chris Hedges and asked for my comments. Hedges refers to Rafael Cruz as “a rabid right-wing Christian preacher.” That seems to be an accurate depiction of the man. 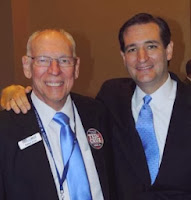 Rafael was born in Cuba in 1939, and as a teenager became involved in the revolution against Batista. In 1957 he was jailed and tortured before fleeing to Texas with a student visa, where he graduated from the University of Texas in 1961.
In a recent advertisement for an audio Spanish Bible narrated by Rafael Cruz, he is said to be “Director of Purifying Fire Ministries and a professor of Bible and Theology at Advance Bible Institute.” I could find no other information about either entity. And I have also been unable to find any church location for Cruz’s ministries in Carrollton, Texas, where he lives.
Suzanne Hinn, wife of televangelist Benny Hinn, is the founder of an organization called Purifying Fire International, and Cruz has been identified with that group. But in spite of the similarity of the names, I could find no evidence that they are linked, in spite of some articles (probably incorrectly) connecting the two.
An Oct. 1 article on Huffington Post links Cruz to an ultra-rightwing ideology known as Christian dominionism or Christian reconstructionism, a frightful theology I wrote about in my book “Fed Up with Fundamentalism” (pp. 48-51). That in itself is cause for considerable concern.
Rafael Cruz, who became an American citizen in 2005, has been an outspoken cheerleader for his son Ted and his ideas, especially among conservative Christians. A recent story in the Washington Times is titled, “Rafael Cruz energizes Colorado Christians.” He was speaking at a Restoring Christian Values brunch before preaching at a Colorado Springs church on Sunday, Sept. 29.
The brunch was partially sponsored by CitizenLink, an affiliate of Focus on the Family. In an Oct. 4 interview posted on their website, Cruz spoke mainly, and in strong terms, against Obamacare, which he opposes as much as his son does.
The welfare of the nation will continue to suffer if we allow the country to fall under the control of ideas forwarded so forcefully by Sen. Cruz and his father.
Posted by LKSeat at 5:37 AM