Faith and Freedom in Wisconsin

The Wisconsin recall elections are over, and Scott Walker was successful in retaining his position as governor. Some may not realize, though, that the lieutenant governor was also up for recall and was also successful in keeping her position. 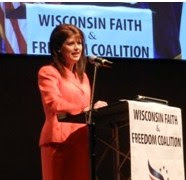 Rebecca Kleefisch (b. 1975), a former television news anchor, was elected the lieutenant governor of Wisconsin in November 2010. She attends the evangelical Crosspoint Community Church in Oconomowoc, WI, and in June of last year she was one of many U.S. political leaders I heard speak at the Faith & Freedom (F&F) Coalition Conference in Washington, D.C.
Early this month, the F&F Coalition launched a voter education campaign in Wisconsin utilizing a sophisticated mix of 100,000 voter guides distributed in churches as well as “virtual voter guides” sent by email and text message, mail pieces, GOTV phone banks, over 25,000 door knocks, and social media. The campaign was expected to total over 600,000 voter contacts statewide and in key State Senate districts.
According to the F&F Coalition’s June 1 press release, “Evangelicals, faithful Roman Catholics, and Tea Party voters have been targeted to receive ‘virtual voter guides’ via email and on their mobile phones with banner ads and text messages.” Their goal, of course, was the re-election of Walker and Kleefisch.
The Faith & Freedom Coalition Conference will be held again this week (June 14-16) at the Renaissance Hotel in downtown D.C. As I wrote on this blog last year, the head of the F&F Coalition is Ralph Reed, former head of the Christian Coalition. The F&F Coalition is also ostensibly a Christian organization. This week’s speakers include Christian spokesmen such as Richard Land, Tony Perkins, and Jonathan Falwell.
But this week’s F&F Coalition conference also includes some politicians you may have heard of: Mitt Romney, Mitch McConnell, and Marco Rubio among many others. The marriage of conservative Christianity in the U.S. and the Republican Party seems to be quite healthy still.
Just two days ago (on June 8), the F&F Coalition announced, “Fresh off of her win in the Wisconsin recall election, Lieutenant Governor Rebecca Kleefisch is confirmed to be a keynote speaker at the Patriots Awards Gala Banquet in Washington, DC on Saturday, June 16th!” (That banquet is the climax of the three-day conference; registrants can attend the banquet for an additional $99.)
So, this is the Faith & Freedom Coalition that helped decide the Wisconsin election in favor of the incumbent governor and lieutenant governor. The faith they propound is an ultra-conservative form of Christianity. The freedom they espouse is particularly that of (nearly) laissez-faire capitalism, which greatly benefits the wealthy people in society.
The faith of the F&F Coalition stands in opposition to many other people of faith, though, such as my Wisconsin friend Bob Hanson, who worked for the defeat of Walker and Kleefisch. And the freedom sought by the Coalition stands, for example, in direct opposition to the freedom of public labor unions being able to engage in collective bargaining.
Bob recommends the Wisconsin Council of Churches (WCC), whose motto is, “We pray and work together for the unity and renewal of the church and the healing and reconciliation of the world.” Last month the WCC issued “The Call for a Seasonof Civility in Wisconsin,” a fine statement signed by many pastors and faith leaders across the state. Lieutenant Governor’s pastor was not among them.
I am grateful that Christian faith and freedom in Wisconsin is much broader, and much more in keeping with the teachings of Jesus Christ, than that exhibited by the Faith & Freedom Coalition.
{Bob Hanson (b. 1940) is an ordained Lutheran minister and now also a Buddhist practitioner. We became friends many years ago in Fukuoka, Japan, where he was also served for a time as a missionary. For those of you who would like to read more of what Bob wrote about the situation in Wisconsin, please see the following (edited) e-mail received from him on June 7.}


We had our weekly breakfast on Thursday after Election Day. It goes without saying that the people who sought the recall of Scott Walker are disappointed, sad, and a bit angry. But the people of Wisconsin are resilient, strong folks.
As the reality of the night became clear, I headed for the meditation chair for some quiet time and some letting go. It was helpful. I have been reflecting and here are some things that have come to mind.
1. The spirit of the demonstrations, the signing of more than a million people to bring on the recall itself was wonderful and necessary.
2. Many of us voted for K. Faulk in the primary elections. She would have been stronger than Tom  for many reasons: she is a woman, and she would have articulated the issues and the vision more clearly. Tom just attacked Walker.
3, Now that we (Democrats that is) did take over the leadership of the State Senate, I have been wondering if the unions rushed us into the recall instead of focusing on the State Assembly and Senate. Sure would have saved money.
4. When we saw the money, 8 to 1, Walker had mostly from out of state (the Koch Brothers are big here, Walker has given them some State industry here already), we knew it would be almost impossible to win.
5. Finally, I am telling myself, this is a democracy, roughed up, falling apart, but for a period of time it was really awake, active. The only sad part is Walker and his minions have divided the state, communities, families and this has rolled over into some congregations, I am sure. But groups like the WI Council of Churches, the Faith Based Organizing groups, and religious leaders have been encouraging civil conversations.
Please visit this site and see the fine, fine statement on civility signed by a vast majority of religious leaders in Wisconsin.
Parker Palmer’s new book, The Healing of Democracy will be one thing used and there will be training in the fall to bring this into congregations across the state. I know, even though I am not leading a congregation now, I am going to the training.
Hope this helps, Leroy. Of course in many ways, the right wing church and the scared clergy of others, including the Lutherans around here, by saying nothing supported Walker and his tactics. There was no encouragement for conversation, listening, so that we could become more unified as communities, even though we might not vote the same way.
There is need for a lot of healing here, and I feel for myself as well. I guess we find ourselves between “it was a waste of time, the bastards would have won anyways” and “this is and was a defining moment for us and in a sense we all won, the system works even in its brokenness.” I do not like being in that tension, but where else should people of spiritual practice be, whatever the name you give your practice? We let the ego go, turn to our neighbor, embrace and live out our lives in compassion and wonder.
Posted by LKSeat at 5:43 AM