May is a time of celebration in the modern nation of Israel. Next week on May 15, Israel will celebrate its 64th birthday, as the establishment of the State of Israel took place on that day in 1948. Less than a year later, on May 11, 1949, Israel was accepted by majority vote as a member of the United Nations.
Previously, in October 1946, President Truman issued a statement indicating America’s support for the creation of a “viable Jewish state.” In November of the following year the United Nations voted for the Jewish people to be given a “homeland” in the territory their ancestors had inhabited nearly two thousand years, or more, before. The United States was one of 33 countries who voted for the new Jewish state.
In passing, it is worth nothing that the modern nation of Israel was established by the United Nations, an organization now much (and hypocritically?) maligned by many people in this country who tend to be staunch supporters of Israel. There was, and continues to be, a problem with the new state of Israel, however.
Palestine, the land that was partitioned and given to the Jewish people as a homeland, was already occupied. It was inhabited largely by Arabs who were mostly Muslims (although about 10% of them were Christians). Since the ethnic Jews from other countries began moving in and occupying the land, Palestinian Arabs have been squeezed into smaller and smaller portions of the territory. 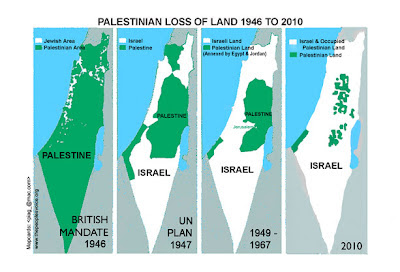 Not surprisingly, there was immediate negative Arab reaction to the creation of Israel in May 1948. In support of the Palestinian Arabs, the surrounding Arab states attacked the independent State of Israel on the very first day of its existence. Thus began the first Arab-Israeli War. Even though there have been numerous cease-fires, negotiations, and peace talks, tensions and sporadic hostilities between Israel and Palestine have continued to the present.
It is not difficult to be sympathetic with Israel’s desire for a homeland. The holocaust in Europe resulted in the extermination of around 6,000,000 Jews. That was an unmitigated human tragedy. And through the centuries Jewish people have been grossly mistreated by many Christians who considered all Jews to be “Christ killers.”
But it is also hard not to be sympathetic with the Palestinian Arabs. Even though about 1/3 of the population of the country was Jewish at the time of the 1947 partition, still, for many of the Arabs who made up the majority, land on which their ancestors had lived for centuries, in some cases, was taken from them and given to people with a different language, different customs, and a different religion.
It is true that since 1948 there have been many terrorist attacks on the Israelis and other acts of violence committed by Palestinian Arabs. But if there is not provision for a peaceful, and just, settlement of disputes, injustice and oppression usually spawns violent reaction.
So as Israel celebrates its 64th national birthday in a few days, the burning question remains: will Israel and Palestine ever be able to coexist peacefully?
Posted by LKSeat at 6:27 AM