In January of 2010, the Supreme Court made one of its worst decisions in years, if not decades, and maybe even the worst since the Dred Scott case in 1857. In a 5-4 split decision, the Court ruled in favor of Citizens United, a conservative non-profit organization who had sued the Federal Election Commission.
That landmark decision by the Supreme Court means that it is now unlawful for the government to ban political spending by corporations in elections. Thus, as a consequence of Citizens United, corporations and unions are now free to use their financial resources to air ads explicitly calling for the election or defeat of federal or state candidates for political office.
The justices in the majority ruled that corporations have the same First Amendment right to free speech as individuals, and for that reason the government cannot stop corporations from spending to help their favored candidates. 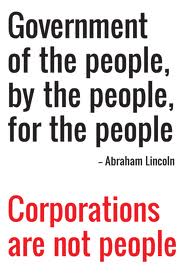 But a majority of the people of this country does not believe that corporations are people, in spite of what the Supreme Court has ruled.
Justice Stevens wrote the dissenting opinion. Among other things, he lamented that the Court “voted to overturn over 100 years of legal precedent by giving corporations the same status as individuals,” and by removing “legal barriers in place to protect the electoral process from corporate and legislative corruption, which is what the laws for the past 100 years were in place to do.”
Just a few days after the Court’s decision in 2010, President Obama gave the annual State of the Union message. In that talk the President averred, “Last week, the Supreme Court reversed a century of law to open the floodgates for special interests—including foreign companies—to spend without limit in our elections. Well, I don’t think American elections should be bankrolled by America’s most powerful interests, and worse, by foreign entities.”
Justice Stevens and the President were right: the Supreme Court made a bad decision.
(Here in the Kansas City area, the Occupy the Courts protesters will be at the federal courthouse at 400 E. 9th St. from 11:30 a.m. to 1:30 p.m. There will also be a “post-protest celebration” Saturday evening at the All Souls Unitarian Universalist Church, 4501 Walnut St., KCMO.)

The "Corporations are not People" slogan is one that needs to be taken seriously by all of us who are U.S. citizens. For the sake of our democracy, the bad Supreme Court decision of 2010 needs to be opposed--and reversed.
Posted by LKSeat at 5:52 AM