The Occupy Wall Street protesters divide the country into two groups: the wealthiest 1% and all the rest, the 99%. I question whether that simply bifurcation is the best way to analyze the current financial situation of the people in the U.S. (or any other country).
In criticism of the OWS activities and public appeals, an opposition movement has been started and promoted by fiscal and political conservatives (Tea Party types). They call themselves the 53%—as in the 53% of Americans who pay federal income taxes. And they are making their voices heard on Twitter, Facebook, and elsewhere as they tout personal responsibility and the work ethic.
I have serious questions about the rhetoric of the 53% people, who speak mainly in opposition to the 47% of the USAmericans who do not pay any income tax. They stress that they, the 53%, are the “righteous” ones, those who are paying the taxes that support the government assistance received by many of the OWS protesters.
As you have probably seen, the Congressional Budget Office (CBO) in “Trends in the Distribution of Household Income Between 1979 and 2007,” a document released last month, indicates that “after-tax income for the highest-income households grew more than it did for any other group.” That information was hardly a surprise.
(The CBO is a federal agency within the legislative branch of the U.S. government that provides economic data to Congress. It was created as a nonpartisan agency in 1974).
CBO finds that, between 1979 and 2007, income in the U.S. grew by:
* 275 percent for the top 1 percent of households,
* 65 percent for the next 19 percent,
* Just under 40 percent for the next 60 percent, and
* 18 percent for the bottom 20 percent. 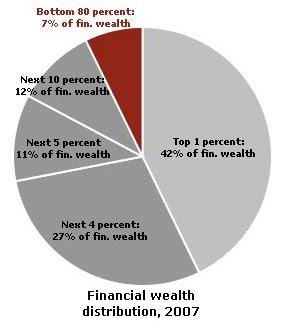 The above summary shows a considerable difference between the top 1% and the next 19%. But still, the latter aren’t hurting all that much. In a previous posting I mentioned the fact that the top 1% possesses 42% of the financial wealth of the nation and the bottom 80% has only 7%. But that means that those who in the 2%-20% bracket hold 51% of the financial wealth on the U.S. So they should be making it all right financially.
(The statistics given above are based primarily on the work of Dr. G. William Domhoff, a research professor at the University of California. Domhoff first published Who Rules America? in 1967, and he has updated that bestselling book several times. Domhoff also presents his updated research on financial power in the U.S. on his website. )
It seems to me our main concern ought not to be directed toward the 99% in opposition to the wealthiest 1%. Rather, if we have any compassion for hurting people, shouldn't we be most concerned for the 80%, including the vast majority of the 47% whose income is so low paying taxes is not required? They are the people in our society who are hurting the most, and people who need help rather than criticism.
Posted by LKSeat at 6:32 AM