Karen Armstrong, an Englishwoman who was once a Roman Catholic nun, first rose to prominence in 1993 with her book, A History of God: The 4,000-Year Quest of Judaism, Christianity and Islam, an international best seller. She has written several widely-read books since then.
In 2008 Armstrong (b. 1944) received the $100,000 TED Prize. She used that windfall to call for the creation of a Charter for Compassion, which was unveiled the following year. (TED, Technology Entertainment and Design, is a global set of conferences owned by the private non-profit Sapling Foundation, formed to disseminate “ideas worth spreading.”)
The Charter for Compassion was created online by the general public and crafted by leading thinkers in Buddhism, Christianity, Hinduism, Islam, and Judaism. In November 2009 it was signed by a thousand religious and secular leaders—and now by over 75,000 more people, including me. The charter has been translated into more than thirty languages. 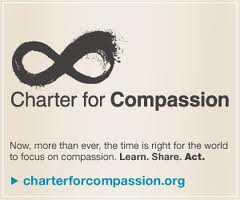 The principle of compassion lies at the heart of all religious, ethical and spiritual traditions, calling us always to treat all others as we wish to be treated ourselves. Compassion impels us to work tirelessly to alleviate the suffering of our fellow creatures, to dethrone ourselves from the centre of our world and put another there, and to honor the inviolable sanctity of every single human being, treating everybody, without exception, with absolute justice, equity and respect.

That statement, and the paragraphs that follow it, express noble sentiments, indeed. (You can read the whole charter by clicking on this link.)
Armstrong’s most recent book is Twelve Steps to a Compassionate Life (2010). On the first page of the Preface, she declares, “One of the chief tasks of our time must surely be to build a global community in which all peoples can live together in mutual respect.” I certainly agree.
But I also wonder why no mention is made of the Declaration Toward a Global Ethic, about which I posted last time. (Did she need to “re-invent the wheel”?)
Unfortunately, some in our society don’t seem to be much in favor of compassion, including some political leaders. Gov. Perry, for example, criticizes liberals who seek to advance “a radical secular agenda in the name of compassion” (Fed Up! p. 13). Later in the same book he strongly criticizes President Bush’s (W’s) “Compassionate Conservatism” (p. 143).
Ayn Rand, the darling of some prominent politicians today, was no supporter of compassion. And back in 2004, the president of the Ayn Rand Center of Individual Rights, railed against the Bush Administration's war in Iraq for embracing compassion (You can read the article here.)
Armstrong, though, contends that “to wish for your enemy’s well-being and happiness” is “the supreme test of compassion” (p. 185). Loving one’s enemies as one loves oneself sounds like something I have heard somewhere else.
Do those words not apply to nations or to politicians?

Note: For you in the D.C. area, Dr. Armstrong will lead a forum on compassion at Washington National Cathedral on the morning of September 11. For you who live in the (north) Kansas City area, the Vital Conversations book discussion group will be discussing the last half of Dr. Armstrong’s book at their regular monthly meeting (at the Mid-Continent Public Library in Gladstone), from 1:00 to 2:30 on Wednesday, September 14.