Thirty True Things Every Christian Needs to Know Now is the title of the manuscript for a new book that I mailed to a publisher just yesterday. There are thirty five-page chapters proposed for the book, and #21 is “Too Little Is Almost Always Better Than Too Much.”
In that chapter I write about the “simple living movement” of the 1960s and 1970s—and also refer to Christy Edwards, my pastor’s wife,who preached at Second Baptist Church earlier this year and cited the words that were already in my manuscript, “Live simply so that others may simply live.”

In the chapter mentioned, I make reference to the Shakertown Pledge, which was finalized thirty-eight years ago today, on April 30, 1973, at the site of a restored Shaker village near Harrodsburg, Kentucky. (The Shakers, as most of you may know, were members of a religious sect similar to the Quakers; it was most active between 1750 and 1850.)

The Pledge itself was drafted as a response to the unequal distribution of global wealth and resources, and called for group action by Christians to rectify the problem. Here is the Shakertown Pledge in its entirety:


Recognizing that Earth and the fullness thereof is a gift from our gracious God, and that we are called to cherish, nurture, and provide loving stewardship for Earth's resources, and recognizing that life itself is a gift, and a call to responsibility, joy, and celebration, I make the following declarations:

1. I declare myself a world citizen.

2. I commit myself to lead an ecologically sound life.

3. I commit myself to lead a life of creative simplicity and to share my personal wealth with the world’s poor.

4. I commit myself to join with others in the reshaping of institutions in order to bring about a more just global society in which all people have full access to the needed resources for their physical, emotional, intellectual, and spiritual growth.

5. I commit myself to occupational accountability, and so doing I will seek to avoid the creation of products which cause harm to others.

6. I affirm the gift of my body and commit myself to its proper nourishment and physical wellbeing.

7. I commit myself to examine continually my relations with others and to attempt to relate honestly, morally, and lovingly to those around me.

8. I commit myself to personal renewal through prayer, meditation, and study.

9. I commit myself to responsible participation in a community of faith. 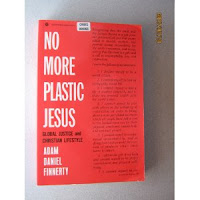 Shakertown Pledge. Further, I invite you to not just think about it but to go on and make the pledge. I first became aware of the Pledge when I read No More Plastic Jesus: Global Justice and Christian Lifestyle (1977) in the late ’70s, making the pledge then and renewing it a few days ago.

Making the Shakertown Pledge now may not have a great influence upon the world in the years ahead, but it will have some influence. And it will also make a difference, a positive difference, in the lives of all of us who make, and live up to, the commitments contained in the pledge.
Posted by LKSeat at 7:58 AM