My posting on Father’s Day was partly about gender equality, and now I want to share some more thoughts on that important subject. When I wrote ten days ago, I talked about how the emphasis on gender equality has taken a lot of pressure off fathers. It has also, thankfully, made it possible for some fathers to spend more time with their children. But perhaps for other fathers it has increased stress because of added child care and housekeeping expectations.
I appreciate the comments which Thinking Friend Susan Miller posted regarding my June 20 piece about fathers. She wrote that when she was at home her mother always made more money than her father. Susan continues, “She was a teacher, my father a preacher (mostly in small country churches). It was never an issue in our house. My dad was also the main caregiver because he was able to stay home with us when we were sick and run us to and from practices. Again, it never occurred to us that this was unusual. So I thank both my father and mother for not raising my brothers and me in a home of stereotypical expectations. I think we are all better parents because of it.”
Although there is some remaining societal stigma, some fathers are satisfied to work only part time, or even to be “househusbands,” in order to spent more quality time with their children. I think this is commendable. For some men with a full-time job, though, there is now more stress because of the expectation that they spend more time in childcare and in doing housework than traditionally done. Thus, “Now, Dad Feels as Stressed as Mom” was the title of a June 18 article in The New York Times.
In a lighter vein, I used to say that there would never be full gender equality until women were willing to carry things in pockets like men (wisely) do. While I still think that is true, perhaps it is also true that gender equality also depends to a degree on men being willing to carry, as I have for years as it is a long-standing custom in Japan, what I have recently learned is now sometimes called a murse (a male purse) or a manbag, although messenger bag is probably a more popular term.
One of the chapters in Manhood for Amateurs (2009) by Michael Chabon is entitled “I Feel Good About My Murse.” He closes by explaining that his murse “holds my essential stuff, including a book—for true contentment, one must carry a book at all times, and great books so rarely fit, my friends, into one’s pocket—but no more, and so I can wear it, and my masculinity, and my contempt for those who might mock or misunderstand me, very lightly indeed” (p. 157). My sentiments, too. 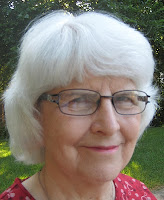 Happy Birthday to June, my lovely wife who was born on this day in 1937. The picture is one I took this morning. (She doesn’t look like she is going to need a gravestone soon, does she?!)