Why Listen to Dr. Cone?

James Cone is an extremist. But that is probably OK. As has often been said, some people have to go too far [to an extreme] to get other people to go far enough. And most of us middle-class white people in America have not gone far enough toward working for a just and equitable society for all people.

Dr. James Cone (b. 1938), professor of theology at Union Theological Seminary in New York since 1970, gave two public talks at William Jewell College last week, and I was happy to be among those who heard those talks--although they were not particularly easy to listen to. He continues to be harsh in his criticism of American whites. One to one, though, he was very friendly and cordial, and you get some indication of his warmth in the picture. 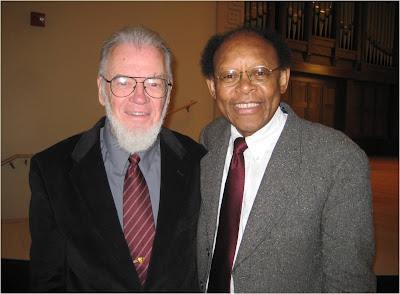 In preparation for Dr. Cone's coming, I read much of his book "God of the Oppressed," first published in 1975 and re-issued in 1997 with an important preface but with few changes in the original book. In Milton Horne's "Bible study" class at Second Baptist Church we discussed Dr. Cone's book for five weeks before his coming. It is a tough book. In spite of considerable talk now about the importance of building bridges rather than driving wedges, bridge building was not was what Dr. Cone was about, especially in 1975.

Since Dr. Cone's voice is so strident, we comfortable, middle-class white people naturally ask, "Why listen to Dr. Cone?" There are some good reasons: (1) Most African-Americans in this country are descendants of people who were grossly oppressed by the insidious institution of slavery. While that doesn't excuse aberrant behavior in the present, the woeful effects of past oppression must be recognized. Listening to Dr. Cone helps us grasp some of how that oppression continues to maim many in that tradition.

(2) Many of us white people, in spite of our attitudes toward African Americans now, are descendants of those who were slaveholders. Littleon Seat was my first grandfather to live in Missouri. His father, Hartwell, was a slaveholder. Two years before Littleton was born in Virginia in 1788, two of his older brothers were killed by a young slave. (I have always wished there was some way to get more information about that incident.) When the Hartwell Seat family moved to Tennessee, they brought slaves with them. (Years ago I saw Seats Chapel, a black church building in central Tennessee that was probably formed by former slaves of Hartwell, my grandfather.) Thus, listening to Dr. Cone helps me to come to the painful realization that I have come from a family of oppressors. I, and others like me, should use that realization not as a cause for feeling guilt, but as a spur to greater efforts in working for racial justice.

P.S. After posting this, I received an e-mail from a Korean friend who shared the following picture taken of Dr. Cone in Tokyo in 1978 or 1979. 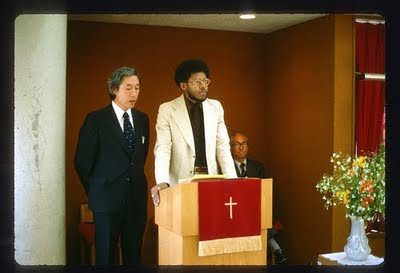